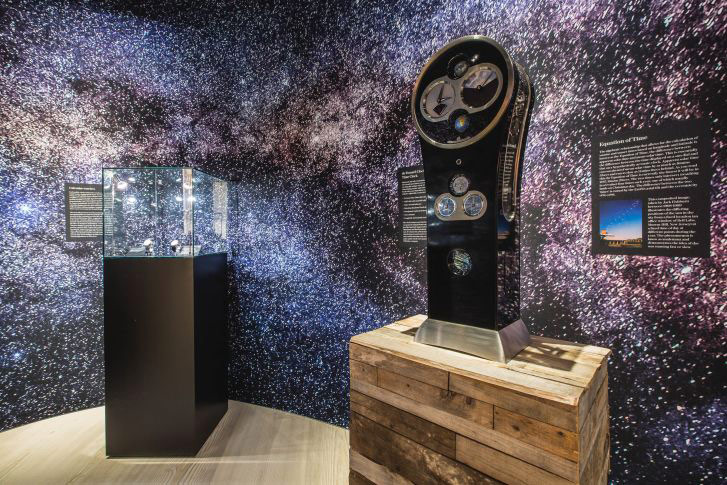 Watchmakers have descended on London for one of the UK’s largest luxury watch fairs, Salon QP. The annual fair opened its doors Thursday night and will run through Saturday. Over 50 brands — from household names like Vacheron Constantin, to rising stars like Akrivia — will exhibit their latest timepieces at the fair’s ninth edition.

As well as giving the industry a look into new trends, the event is hosting a number of exhibitions for watch enthusiasts. Among this year’s displays is “Astronomy: Time & Space,” which focuses on horologists’ fascination with the cosmos, and “Behind the Wheel,” which considers the intersection of the watch and car industries.

Trends to watch
A number of prominent watchmakers, including Rolf Lang and Atelier de Chronometrie, are unveiling new designs for the first time at Salon QP.
Among the most exciting debuts is Montblanc’s latest addition to its Timewalker collection: a contemporary arrangement of brown ceramic and rose gold, punctuated by a slender red second hand. Horologist Kari Voutilainen also launches his exquisite 28 R12, while Urban Jurgensen unveils The Alfred, its long-awaited — and uncharacteristically modern — new model.

“On a design front, we have new watches that span a wide range of modern and traditional styles,” said Chris Hall, digital editor of QP, the luxury watch magazine behind the event. “There’s a lot of use of color, and a continued emphasis on traditional crafts.”

“What’s really big right now is customization — bespoke watchmaking at every price point. Also, we see a greater focus on design and materials, as evidenced by our ‘Material Factors’ exhibition and Rado’s True Designer series in particular, and new launches like Girard-Perregaux’s Laureato in black ceramic.”

Celestial timepieces
Amid the numerous side events taking place over the three-day fair, the exhibition “Astronomy: Time & Space” looks at watchmakers’ relationship with astronomy. Through a selection of contemporary and classic timepieces, it presents examples of horology’s engagement with the physics underpinning time as we know it.

One of the show’s most intriguing displays is De Fossard’s Solar Time Clock, a device made from 750 handmade parts. The standing mechanical clock can — when adjusted for the correct longitude and latitude — indicate the current moon phase, the position of the sun and the time of sunrise and sunset.

Attendees at the exhibition may also examine a collection of other celestial wristwatches, like Jacob & Co’s Astronomia Tourbillon, which features a small, spinning representation of the Earth. Elsewhere, Van Cleef & Arpels’ Midnight Planetarium, shows the real-time rotation of six planets — including earth — as they slowly orbit the clock’s face.